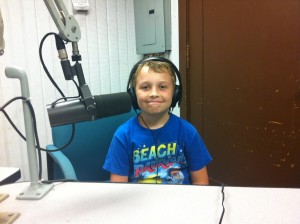 Today’s show featured an my son as co-host and guinea pig. We started the afternoon with a couple of pieces that recognized Memorial Day and then turned to a set of pieces chosen by Miles (mostly from The Amazing Spider-Man 2). Then, as a follow-up on some of the conversation I had with Robert Raines during the previous week’s interview, I played several examples of pieces created by David Cope using his adaptive, learning software called EMI (Experiments in Musical Intelligence). I asked Miles to guess which pieces were written by human composers and which were copies created by EMI.

Listen to the show here:


Zero Crossings – May 25, 2015, Memorial Day and Miles Griffin as co-host and guinea pig