In 2000, inspired by our mutual love of science, the amazing artist Karen Fitzgerald and I collaborated on a project funded by the Greenwall Foundation and the Queens Community Arts Fund. We chose six poems by living authors that address the human condition through natural and scientific imagery. I composed six songs for the Goliard Ensemble: solo voice, flute, violin, cello, piano and percussion; Karen created six 60” paintings. The work premiered in October, 2000 at the Steinway Reformed Church, Astoria, NYC. These six round paintings were paired back-to-back and suspended above the audience. The project toured six South-East states during the Fall of 2000.

These pieces are very close to my heart, and in 2007,  I revisited, revised and re-arranged five of them, paring it all down to a work for voice and piano in the hopes of making them more easily available for wider performance. Stylistically, the songs live in a place where art song, music theater and pop song overlap. 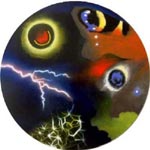 No heart’s desire is repeatable, or,
therefore, predictable. If a few hungry foxes
gorge on a large population of rabbits,
the population of foxes increases
while that of the rabbits declines,
until some point of equilibrium is passed
and the foxes begin to vanish with
the depleted supply of rabbits, and then
the rabbits multiply, like rabbits. And so on.
The ebb and flow of desire and fulfillment
is a story as old as the world. So,
if I loved you, finally, too much, until
you began to disappear, and I followed,
would you theoretically return to love
repeatedly again? There are forces so small
in our story of foxes and rabbits
no Malthus could ever account for them.
Whole species daily  disappear, intractable
as weather. Or think of a continent’s
coastlines, their unmeasurable eddies
and whorls: infinite longings inscribed
by finite space and time,
the heart’s intricate branchings.

I reserve the triangle
For the wee hours,
The chigger-sized hours.

In the meantime, the bedroom window
Reflecting the owlish aspect
Of the face and the interior.

One hopes for tangents
Surreptitiously in attendance
Despite the rigors of the absolute. 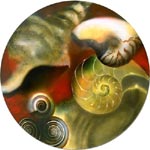 To lay the logarithmic spiral on
Sea-shell and leaf alike, and see it fit,
To watch the same idea work itself out
In the fighter pilot’s steepening, tightening turn
Onto his target, setting up the kill,
And in the flight of certain wall-eyed bugs
Who cannot see to fly straight into death
But have to cast their sidelong glance at it
And come but cranking to the candle’s flame —
How secret that is, and how privileged
One feels to find the same necessity
Ciphered in forms diverse and otherwise
Without kinship — that is the beautiful
In Nature as in art, not obvious,
Not inaccessible, but just between.

It may diminish some of our dry delight
To wonder if everything we are and do
Lies subject to some little law like that;
Hidden in nature, but not deeply so. 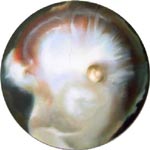 I sit and rock my son to sleep. It rains
and rains. Such as we are both asleep,
we swim past the stars,
bad stars of disaster, good stars of the backbone of night.

We know these stars as they are
and as we’d wish them to be, Milky Way,
Dog and Bear, hydrogen and helium, the 92
elements which make all we know of beauty.

We know nothing of angular size or
the inverse square law of the propagation
of light, and swim through a cold, thin
gas, between and among the stars,

which swim likewise between two creations
like children who know sleep intimately.

Physics says: go to sleep. Of course
you’re tired. Every atom in you
has been dancing the shimmy in silver shoes
nonstop from mitosis to now.
Quit tapping your feet.  They’ll dance
inside themselves without you. Go to sleep.
Geology says: it will be alright. Slow inch
by inch America is giving itself
to the ocean.  Go to sleep.  Let darkness
lap at your sides. Give darkness and inch.
You aren’t alone. All the continents used to be
one body. You aren’t alone. Go to sleep.
Astronomy says: the sun will rise tomorrow,
Zoology says: on rainbow-fish and lithe gazelle,
Psychology says: but first it has to be night, so
Biology says: the body-clocks are stopped all over town
and
History says: here are the blankets, layer on layer, down on down.

There are no reviews yet.