Sam is a beleaguered sandwich store clerk who is having a very bad day. Then he has a life-altering encounter with Frank – a force of nature who believes the customer is always right. Horribly, horribly right. A gruesome comedy-horror about words that cannot be unspoken, and sandwiches that cannot be unmade. Profound philosophical questions lead to graphic consequences, all centered around the world’s most foul condiment.

This is my second collaboration with Jeffrey Williams.

Commissioned by the Latvian Culture Capital Fund for the Riga-based Flute Quartet 4-tune. Premiered at the Ave Sol Concert Hall in Riga, Latvia, on April 7, 2010.

Purchase a PDF of the score & parts, audio & video files for $75 via PayPal:

“There is grandeur in this view of life, with its several powers, having been originally breathed into a few forms or into one; and that, whilst this planet has gone cycling on according to the fixed law of gravity, from so simple a beginning endless forms most beautiful and most wonderful have been, and are being, evolved.” – Charles Darwin, On the Origin of Species, 1859

For the past 15 years, my reading of scientific literature has affected my worldview, brought me solace, and sparked my imagination. The job of science, as I see it, has always been twofold: to rationally peer behind the veil of reality and discover what is there, and also to imagine future possibilities. I find it fascinating how fantastical reality can actually be, and that so many connections exist amongst ourselves and with our world once we actually look.

The science of Emergence, which has no direct translation in Latvian, is the study of how complexity emerges from essentially simple component parts.

King Solomon urged us to look to the ants, “consider her ways and be wise; which having no guide, overseer or ruler, provides her meat in the summer and gathers her food in the harvest.” Scientists and businesses now use Ant Colony Optimization algorithms and other Swarm Intelligence methods for problem solving. Bees, birds, fish and locusts follow essentially three simple rules of movement in groups, and it turns out, humans follow the same rules when walking in a crowded urban environment. The first movement is a structured improvisation for the flute quartet where they use swarming rules to create their music.

The human brain, with its modular structure weaved together by roughly 30 billion neurons electrically firing chemicals across synapses in synchronous waves that produce measurable electronic current up to 12 Hz, is the ultimate example of complexity. Understanding our brains is yet another way of understanding our own evolution as a species: at the deepest level is the emotionless reptilian brain stem, controlling our metabolic system and incapable of anything we would call thought; then comes the limbic system, from which comes our primary emotions and which we share with most other mammals, enabling us to form powerful bonds with each other and with them; stacked on top are the two hemispheres of the neocortex, from which we get abstract and analytical thought, language, and of course, art. As Steven Johnson says in his book Mind Wide Open: Your Brain and the Neuroscience of Everyday Life, “ The more you learn about the brain, the more you understand how exquisitely crafted it is to record the unique contours of your own life in those unthinkably interconnected neurons and their firing patterns.”
For this movement I sampled a recording of a symphony by the Baroque composer William Boyce, which was used in an fMRI (functional magnetic resonance imaging) study of how the brain organizes segmented events. The flute quartet part is largely based on rhythms borrowed from gamelan music, where multiple players create a complex interlocking structure based on simpler rhythmic units.

Researchers into artificial intelligence are using the human brain as a model of learning. While estimates vary of exactly when a completely new form of life will be created by us, inorganic but self-aware, I have no doubt that it is inevitable. And that will naturally force us to question the nature of existence and sentience, and given enough time, might even become a new pathway for human evolution. You can decide for yourself the moral or ethical implications. For this movement, I sampled/quoted two orchestral pieces: Charles Ives’ The Unanswered Question, in which the trumpet part asks “The Perennial Question of Existence,” and the Hymn section of Gustav Mahler’s Symphony No. 8, “Veni Creator Spiritus.”

I decided to go a less serious route with the fourth movement, and create a piece that is somewhat spontaneously created by the flute quartet and the audience. I learned how to use Adobe After Effects to create an animated graphic score, where shapes or graphics of four colors, red, blue, green and yellow are each interpreted by a different flutist, and text or symbol cues are given to the audience to shout, sing or speak. After about a minute, an electronic score enters underneath, comprised mostly of prerecorded human speech and sounds.

Following on the success of her Juan Rulfo project, pianist Ana Cervantes has put together another multi-composer themed commissioning project entitled Song of the Monarch: Women in Mexico. Nearly 20 composers from around the world were commissioned to respond to the theme, which conflates the varied historical roles played by women in Mexican history and the annual autumn migration of Monarch butterflies into Mexico. This new collection of solo piano music includes my …Like Water Dashed From Flowers…, a piece that borrows elements from the folkloric song La Zandunga and Nahuatl poetry. The piece is somewhat demanding and includes aspects of ritual and song, where the pianist is asked at times to recite text, sing, play a rattle, stomp her foot (wearing ankle bells), or utilize other extended techniques, often while playing the piano at the same time.

Now published by Transcontinental Music and distributed by Hal Leonard Corp, it is available for online perusal and purchase here. Transcontinental’s description of the piece: “Griffin’s ominous a cappella setting of this prayer manages to transcend two styles – while distinctly modern and American, its freigish mode keeps it unmistakably “Jewish.” Its intricacies make it a fulfilling endeavor for a more serious ensemble.”

Cause us, O Lord, our God, to lie down each night in peace. And to awaken each morning to renewed life and strength. Amen.

I just received a recording from the Milwaukee Choral Artists‘ February 14 performance, directed by Sharon Hansen, of my El Paso de la Siguiriya, a flamenco-inflected setting for women’s voices of the poetry of Federico Garcia Lorca. Here’s an MP3.

I couldn’t have asked for a better soloist, in this case Rebecca Davies, who, to my ears, nailed the emotive power of singing in the flamenco style. Many thanks to Sharon Hansen!

These performances, led by conductor Barbara Day Turner, are part of a series of performances by various American chamber orchestras who co-commissioned the piece. The concerts will take place at Le Petit Trianon Theater (72 N. 5th Street) in downtown San José, California on Saturday August 29, at 8PM and Sunday August 30, at 7PM.

An arrangement for Violin, Cello, and Guitar of a fiddle melody by Canadian Frankie Rodgers. (2008) ca. 4″

Purchase a PDF of the score and parts for $5 per copy via PayPal:

Live performance by Uncle Joe members Iveta Dejus, violin, Ursula Jurjana, cello, and Charles Griffin, guitar, live at the University of Liepaja in Liepaja, Latvia. This was part of Akti Nakti, an evening of performances by several groups throughout the city of Liepaja. 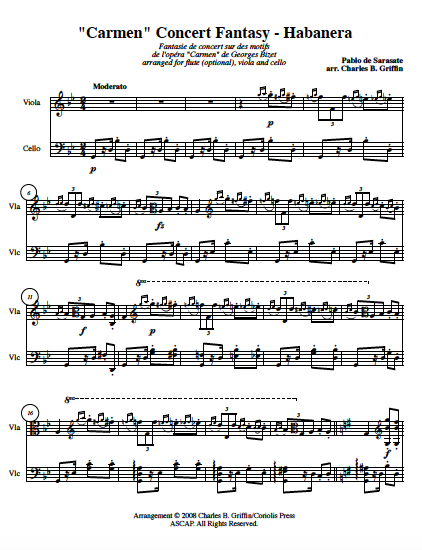 An arrangement for Flute (Optional),Viola and Cello of the Habañera from Bizet’s opera, Carmen, using Pablo Sarasate’s Carmen Fantasy for Violin and Piano as a starting point. (2008) ca. 3’30”

Purchase a PDF of the score and parts for $8 per copy via PayPal:

Commissioned by Putni, Antra Dreģe, director, with funds from the Latvian Culture Capital Fund. Premiere in Riga October 7, 2007 at the Latvian History Museum in Riga.

Purchase a PDF of the score for $2 per copy via PayPal (Perusal available below):

Click on the image to open a perusal PDF (pages 1-11) in a new window.

This piece grew out of some workshops I had created for the women’s vocal ensemble, Putni, which included an introduction to flamenco, among other things. The piece includes a substantial amount of clapping in the flamenco style, where two parts interlock, called the palmas and contrapalmas. This clapping can be undertaken either by members of the vocal ensemble or by separately contracted performers. The number of performers clapping is flexible and left to the discretion of the director. There are two ways to clap in flamenco: with palmas secas (loud, with palms open, clapping one hand against the heel of the other palm), or palmas sordas (quietly, clapping two cupped palms together). After the introduction only palmas sordas should be used.

The Footsteps of the Siguiriya
Through black butterflies
goes a girl with dark hair
joined to a white serpent
of mistiness.

Earth of light,
Sky of Earth.

She goes tied to the trembling
of a rhythm that never arrives:
she has a heart of silver
and a dagger in her hand.

‘Where do you go, Siguiriya
with a mindless rhythm?
What moon will gather up your
grief of lime and oleander?

Earth of light,
Sky of Earth.

Purchase PDFs of the score for your choir via PayPal:

On June 8, 2007, the Manhattan Choral Ensemble, Tom Cunningham, director, premiered my The Whole World Was Listening, a new work they commissioned from me as part of their New Music for New York commissioning project. Each year, the MCE commissions four composers to write short works, and then selects one of those composers to receive a larger commission to be completed the following year. I was selected for the larger commission, to be premiered June 8, 2008.

The context for the commission was that I was to write a new work that to be included on a concert of Rachmaninoff’s choral masterpiece, Vespers, or All Night Vigil. Vespers was divided in the performance into two halves, and my piece was premiered in that space in the middle. After perusing several collections of Znammeny Chant, I chose passages from a Communion Chant that I integrated into the final piece, laying the text of the Lux Aeterna portion of the Mass over it.