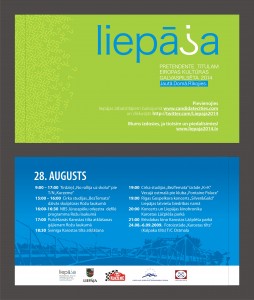 Commissioned by Liepājas Osta (The Port of Liepāja) to commemorate the reconstruction and reopening of the Karosta Swing Bridge, Between Islands, a new electroacoustic work for trumpet will be performed by Olexijs Demchenko and me on August 28 at the site of the Karosta Bridge as the two parts of the swing bridge are reconnected for the first time in two years. The performance will take place at 6:30, following a 5PM processional from Rožu Laukums in the Liepāja city center to the bridge site.

The bridge is a uniquely designed swing bridge, and was completely destroyed by a ship two years ago, just short of what would have been the bridge’s 100th anniversary, and destroying the main access-way between the main city of Liepāja and the district of Karosta (the Naval Port in the region during the Soviet Era).

Between Islands is scored for Bb Trumpet and both prerecorded and live electronics. The prerecorded electronics were created or manipulated with Apple’s Logic and Propellerhead’s Reason software programs, and I will process the audio signal from the trumpet in real time using Korg’s Kaoss Pad 3.

6 thoughts on “Between Islands to be premiered in Liepāja, Latvia August 28”