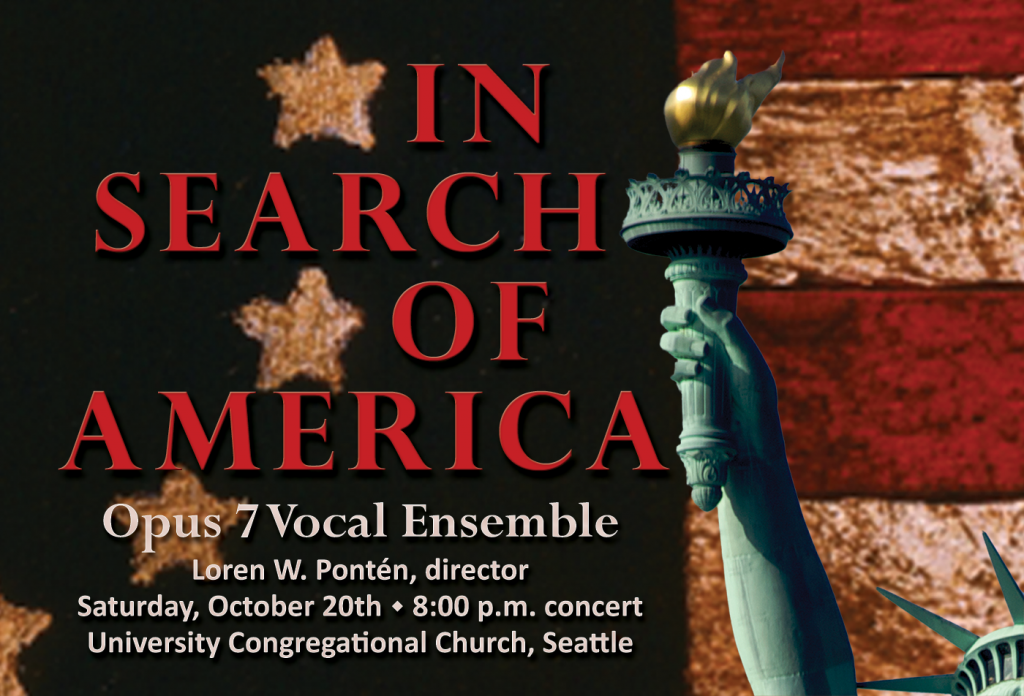 What does it mean to be an American?
Do you know someone who is patriotic?
Who are your American heroes?

Opus 7 explores these questions in the opening concert of our 27th season as we celebrate the American spirit exemplified in these words from Lloyd Pfautsch’s Litany for America: “Dream of a land where all people can think as they please, or say what they think; see an America where no one is another’s master, where no one’s mind is dark with fear—to see an America at peace with the world.”

This thought-provoking and celebratory concert will feature works of musical Americana by some of our country’s most beloved composers, including selections from Randall Thompson’s The Peaceable Kingdom, Stephen Paulus’s Hymn for America, Aaron Copland’s “The Promise of Living” from his opera The Tender Land, and Lloyd Pfautsch’s A Litany for America.

American composer and conductor Leonard Bernstein’s 100th birthday will be celebrated with a performance of his iconic look at immigration in “America” from West Side Story, while Charles Griffin’s Don’t Treat Me as a Stranger, for choir and percussion, poses the question “who is my brother, my sister?

The concert will also feature a mix of historical and patriotic songs including arrangements of God Bless America, The Battle Hymn of the Republic, The Star-Spangled Banner, Irving Berlin’s Give Me Your Tired, Your Poor, and Walter Robinson’s Harriet Tubman.

Two major American choral works form the centerpiece of the concert: Charles Ives’s Psalm 90 (Lord, Thou has been our Dwelling Place) for choir, organ, and percussion, and the West Coast premiere of John Muehleisen’s setting of Walt Whitman’s epic poem Salut Au Monde (“Greetings to the World”)—the American poet’s timely, border-blurring homage to the universal bond between all humanity.