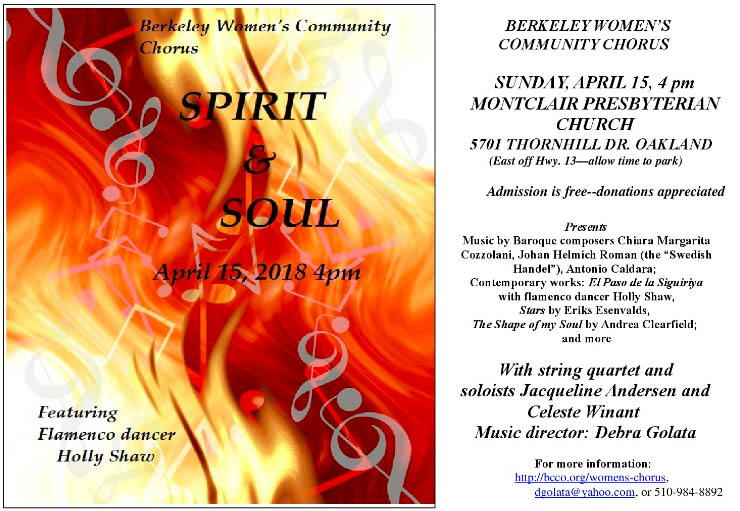 The Berkeley Women’s Community Chorus, directed by Debra Golata will perform my El Paso de la Siguiriya, a flamenco-inflected setting for women’s voices of the poetry of Federico Garcia Lorca. Flamenco dancer Holly Shaw will be featured in this performance. The concert will take place Sunday, April 15 at 4pm at Montclair Presbyterian Church in Oakland, California.

BACKGROUND OF THE WOMEN’S CHORUS: In response to the overwhelming interest in Berkeley Community Chorus and Orchestra, which has a full membership, a new women’s chorus was developed, directed by Debra Golata. We hold to the high standards of BCCO–singing in 2 to 4 part harmony, in a variety of languages with development of vocal and musical skills.

DIRECTOR DEBRA GOLATA received a bachelor’s degree in music education from Michigan State University and a master’s degree in choral conducting from San Jose State University. She has studied modern and flamenco dance, acting, and classical voice in San Francisco, New York City and Santiago de Compostela, Spain. Her vocal performance experience includes solo recitals, opera, musicals, and professional choral singing. She sang with the acclaimed Philharmonia Baroque Orchestra Chorale for 15 years, and she has concertized throughout the United States and Mexico with classical guitarist Jon Harris. For Oakland’s Rockridge Chorale she performed as vocal soloist in India and England and has served as accompanist, assistant conductor and vocal coach for the San Francisco Lyric Chorus. She is organist and music director at Northbrae Community Church in Berkeley and teaches private voice and piano lessons, as well as general music classes for schools in the Bay Area.